tigerannesims - although that one is a bit durrhurr, and I'm going to write new text for all the entries, some day.

Fair bit of warning, right off the bat: I'm a horrible person, and have a rather dark sense of humor. A lot of the jokes I make revolve around people behaving and talking in ways that would never be anywhere near acceptable in real life. Because this is Sims we're talking about, it happens very often! I also, don't really, know, where to put commas all the time.

If you're looking for stories written with talent, insight and humanity, the kind that brightens your day a little and inspires you to be better, then uh... You'll find some really good stuff elsewhere! My stories make the world a little worse by existing. :( There are awful people out there who seem to like them, though. That's why I write them. I love those awful people, they're my homies!

LiveJournal is where I come to be evil, so expect the worst at all times. I'm not kidding. It's a Danger Space.

I play a bazillion Legacy Challenges in Sims 2. (Because I'm crazy.) If you're unfamiliar with the term, it basically means that you start out with a super-poor founder, and play their family through 10 generations. In every generation there is an Heir, who's the one you choose to continue the family. You're supposed to follow a set of rules, and keep scores, etc. but I can't be hazzled to do that.

The Magpie Prettacy Uglacy is my oldest Legacy. A Prettacy is when you start with a really hideous founder, and try to make the descendents get prettier with each new generation. The Mags are a huge clan of Troll/Human hybrids who live in a mansion and are filthy rich. They used to be poor as dirt, though. Southern Mountain Trolls are recognized by their long noses and eye-stalks. Pretty is boring. Now they're an UGLACY!

Here there be Trolls!

The MacAvoy ISBI was started soon after the Magpies, and the two families have intermarried a bit. ISBI means "Im Surrounded By Idiots", and you're only allowed to control one single Sim at any time. Which one is the controllable changes once per generation. The rest of the family have to take care of their own needs, which TS2 Sims are known not to be very good at.

The Starbloom Travecy is a gigantic joke. It's got a more story-driven feeling than the other two, and for once I follow the rules! It's basically a parody on all the bad stories I've ever read. Short summary of the plot: Aylatani is beautiful. She's forced to marry Phil, who's an axe-murderer, and much tragedy. The villain is a time-traveller named Edgar, who's ugly. He bribes the doctors who preform Aylatani's plastic surgery into making her ugly too. Her daughter doesn't recognize her, and thinks she's an imposter who has killed her mother. Then it gets very complicated. This tragic story of misery and woe is brought to us by The Narrator, who must remain nameless for the sake of her Grandmother's reputation.

You can read about all their suffering here.

The spare updates are known as the Nightinwolf Chronicles.

The Edgarcy - AKA the Bogweed Prettacy, is my newest legacy. It's founded by Edgar and Aylatani (who was born with her characteristic looks in this alternate reality). As usual, it's the Narrator who tells the tale. This time, they find themselves in an almost deserted post-apocalyptic wasteland, where they have to deal with their hostile elven neighbour and lots of people who seem to know more about them than they know about themselves.

The Edgarcy can be found here.

sammyfrog and myself. In a much happier life, Liranda Starbloom married Ian Scheiler, and this is the story of their descendants. Narrated by MK'la and Narrator, it has a positive message of love, acceptance and organic farming.

I should probably point out that I made the *ugly* Sims in this challenge to poke fun of certain aesthetic trends I've seen on Simblr (Sims-themed Tumblr), and NOT to mock any real human beings.

The Index can be found here.

The Asylum Challenge, which I keep forgetting that I'm playing, is the origin of characters like Petunia, Esso the Assassin, Monrad, Ethan and Aniya. Edit: This challenge is finished! :)

Most cheaty Asylum ever.

The Athertons was my first challenge. It was an aging-off "ISBI", with a teen in charge for extra problems. If you're new, and want to read my entire blog chronologically, this is where it started.

The Athertons are kind of dumb.

I can never guarantee that you will not want to strangle me after reading any given entry. You must read at your own risk.

I've been thinking about updating the OC questionaire for a while. Some of the questions were out of order, others could have been worded differently or split into two separate ones. I think the questions tie better into each other, the way they're organized now. The old Question 3, asking if the character is human, has been removed. :D

Edit: This post should be public, because I intended to share this. x) I also re-arranged the questions a little, because I think the information on special abilities or disabilities, and things that make their stories interesting, should come earlier. All the questions on personal relationships tend to refer to that info. 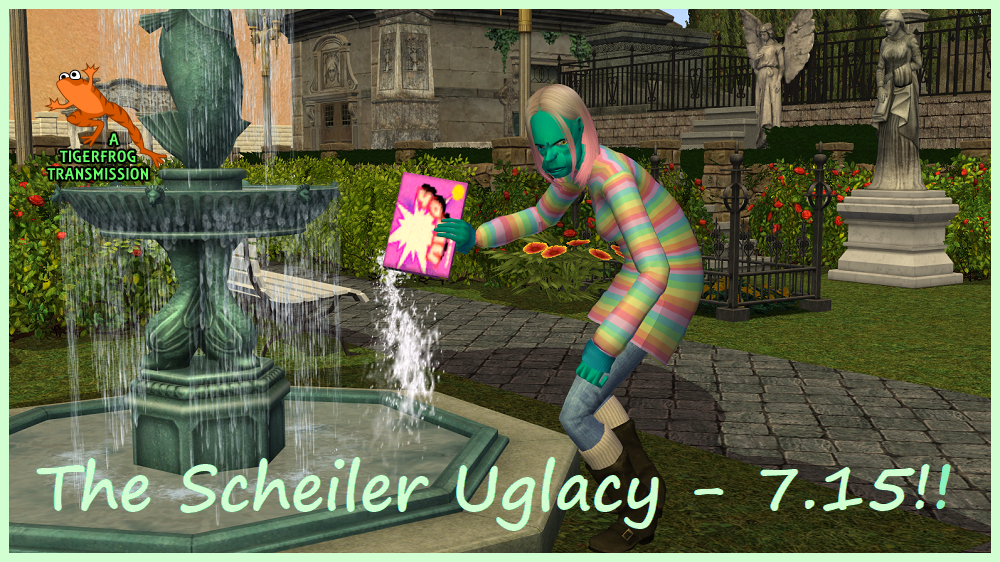 Hiiiiiiii Peepz! This is Raelynn, in case you're new here! It's been a while, but school's just been... so extra. Anyway, it's Saturday on this side of the world today, so I finally had time to write this update!

I don't know what took me this long, ehe he he. Anyway, you can find it here. So far I've only uploaded some of the Scheilers, but I'm planning on uploading all the Sims I've made or bred. Many of them are uploaded to various Dropbox and Box accounts I've had, but I'll replace those links in the hopefully near future. 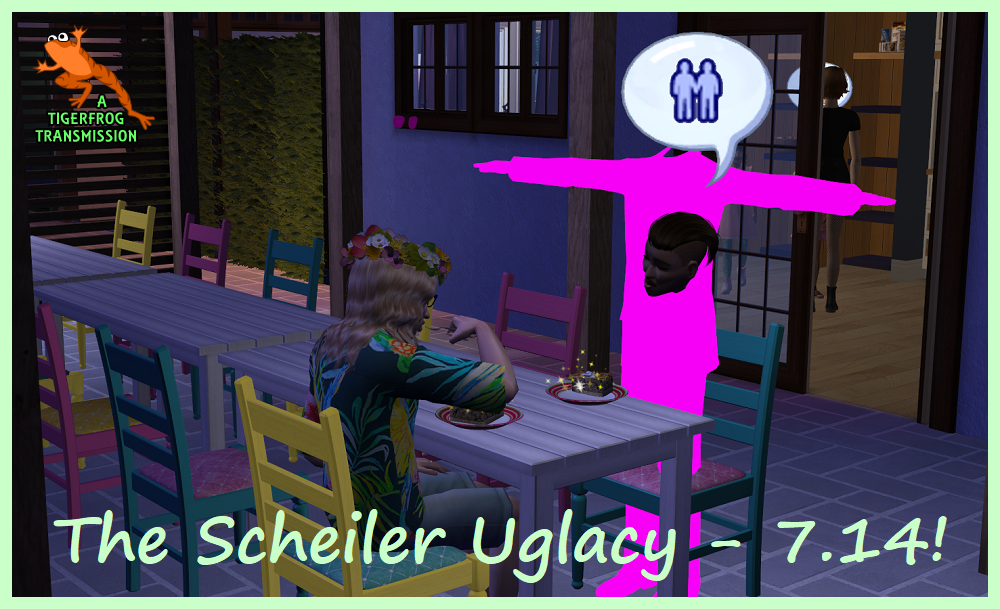 Hii my peepzers! There's a new update in town, and we're back with the Villagers again. This chapter happens kind of parallel to 7.13, and you'll get to see Weedy getting her furcoat and stuff. 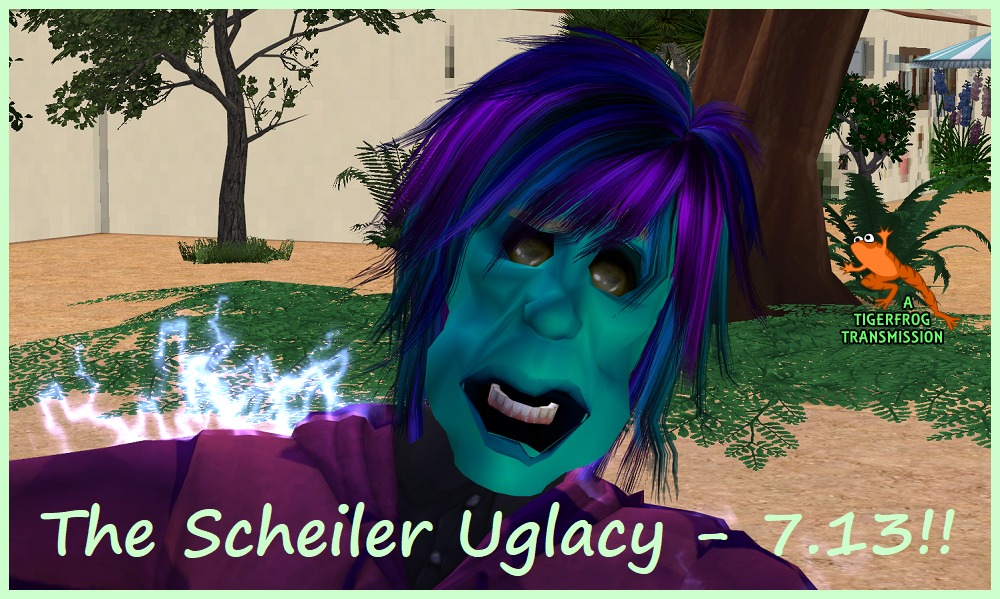 Yo peeeeeeps! I've got another update for you, to cheer you up on a horrible Monday! Actually, I hope your Monday wasn't all that horrible, but that I manage to cheer you up a little anyway. We're going to see the Branch again, and this time people grow up! :O Yeah! 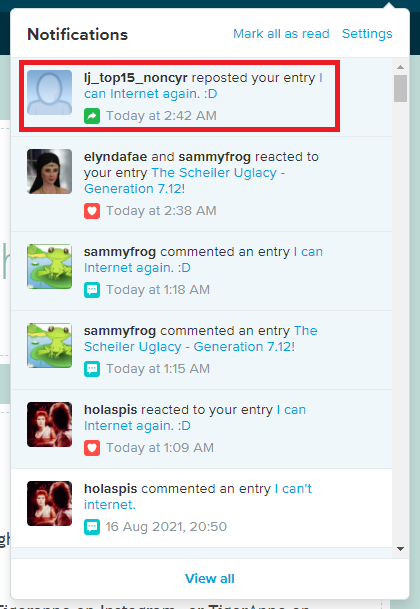 The news that I'm back online was worthy of getting into the Top 15 non-Cyrillic entries. There are really only three possible explanations for this.

1: Non-Cyr LiveJournal is in a really sorry state.

3: I'm actually super LJ-famous, and the fact that I can post again is legit awesome news.


I know which one I'll prefer to believe. But of course, it's actually Raelynn who's popular. x) 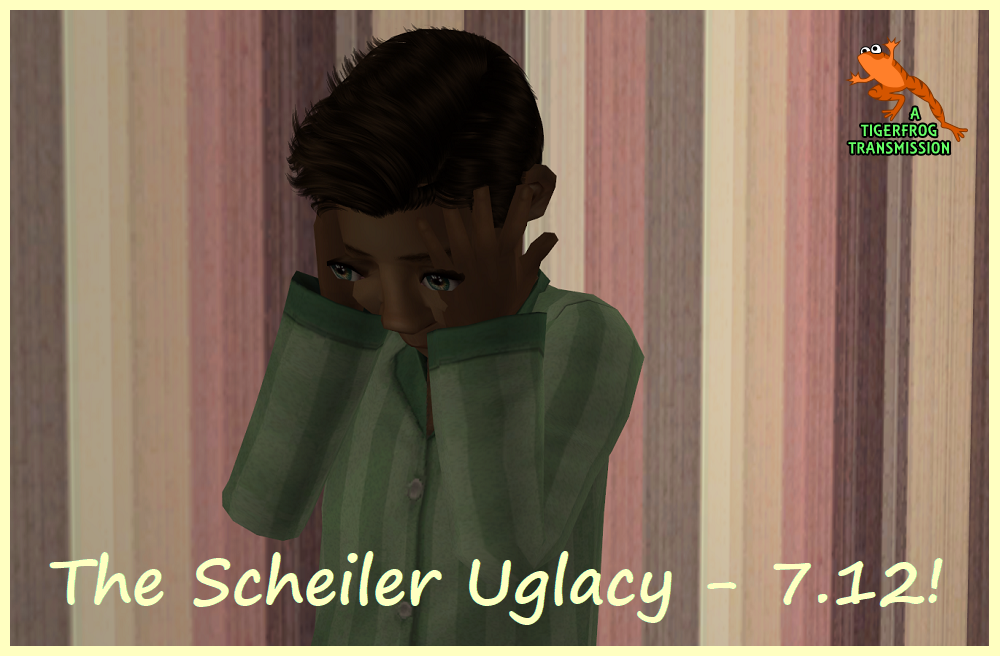 Hi y'all, it's y'all's Narrator - Raelynn. :D I've been on vacation to Florida! :O It was completely unplanned, but one of Mom's best friends bought a house down there and invited us to come and stay with them for a couple of weeks. Yeah, now I've seen real alligators up closer than I ever thought I wanted. Also, I experienced the most traumatic thing I've ever witnessed: A freaking pelican tried to eat a puppy alive! We were at this park by a lake, and there was this little terrier pup there. It was adorbs, fuzzy little thing maybe three months old. Suddenly this bastard bird came waddling up behind it and just casually scooped it up into its beak! We could see the poor little doggo struggling for its life in the chin pouch, and hear it bark and howl, while the pelican repeatedly tried to swallow it. Then the dog's owner came running, and grabbed the bird by its scrawny neck. He shook it violently until it spat the pup back out, and then he grabbed the puppy and ran to his car. It was terrible. I hope I'd have done the same thing.

Peeps! We're back at the Village for a dramatic update. Many things will never be the same after this... :O

Wow, I didn't mean to be gone for a month! You see, I kind of wanted to have a little vacation away from the Internet and its wicked allure. Then I was on a little trip, where one of the souvenirs I picked up was a sniffle. x( It wasn't Da Rona though, most likely, but I was in quarantene and the repairman couldn't come. Well, not until today. He just left.

I know Raelynn's got some updates typed up for y'all peepz, so watch this space this weekend!

My router is dead. It died in the power break last night. It'll probably take a week or so to get it fixed. In the mean time, TTFN and have a good week!
Collapse